This winter, I was living in southern California and had an opportunity to visit a first grade classroom at the Seneca Elementary School in Moreno Valley. Barley wore his little RWR vest and we visited the classroom once a week for about 3 months. There were quite a few children in this first grade for which English was a second language and of course, reading was a struggle for them. The teacher had 30 students and no teacher’s aide or any parental volunteer, so she was very challenged every day to teach and to keep them under some control.

Barley and I would usually have 15 or 16 students each week. They came out two at a time – one was there to pet Barley and the other read him a story. Then, they switched places. It seemed to work very well. Having Barley come to the classroom was like having a rock star visit them. They were always so excited and happy to see him and he seemed to feel the same way. To lose the privilege of reading to Barley was just about the worst punishment they could receive. As our visits progressed, I was able to see that about 6 children were having trouble reading even the simplest of books and at least 2 of them – Oscar and Cristina - were not able to read at all. Oscar slowly progressed but Cristina did not. That is, until our next to last visit when it was again Cristina’s turn to read to Barley. She came out and as usual, just wanted to know what she was going to get for reading and so forth. I explained that this would be her last opportunity to read to Barley and he was really looking forward to hearing her read at least one or two very simple pages. Up to this time, she had not read one single word and instead just guessed at the words. On this day, she became a little more serious and opened the book and with an enormous effort on her part was able to read very slowly 3 or 4 pages. I was so shocked and almost moved to tears. It just reinforced my dedication to this reading program….to think that this little dog could inspire this little girl to try and read was just so wonderful. I took her picture with Barley that day so that she could kiss him and love him.

On the last day we visited the classroom, I read “Cool Dog, School Dog” to the children and then I presented each of them with a certificate (that I found at the dollar store) that said “Super Reader”. I put each child’s name on the certificates; then the teacher and I called each one up separately to receive their little award and a bookmark. I also gave each child a book from a collection of books I found at a garage sale (as many as I wanted for $1). I told them that Barley was counting on them all reading every day. When they came up to get their award, they had the opportunity to pet Barley for the last time and I saw a few tears in their eyes.

It is my privilege to be a part of this program and share these experiences with Barley.

This program is assisted and sponsored by the charity and generosity of: 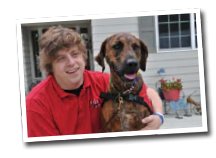 This could be you!

In the Rover program, children with reading difficulties actually read stories to a dog and the dogs love to listen! A child that may be hesitant to read aloud to his peers is typically less stressed when reading to a dog and the dog never judges the child’s reading ability.

Reading With Rover, a 501(c)(3) organization
Copyright © 2022 All Rights Reserved
Built by PixelRocket